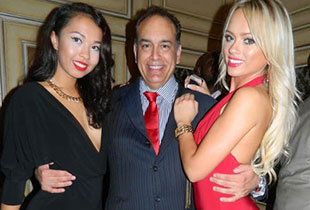 What Are Sugar Daddies?

Even if it's the first time you've ever heard sugar daddy dating, it is easy to literally understand the definition of sugar daddy. As most sugar daddy websites say, typical sugar daddies are men who are interested in a non-traditional relationship with a woman, who is called the “sugar baby.” Sugar daddies spoil their sugar babies with gifts, money, trips and other presents in exchange for regular companionship or sex. Unlike a traditional relationship, sugar daddies and sugar babies are interested in mutually beneficial benefits rather than cultivating a long-term romance.

If you have checked out the sugar daddy twitter scene, then you have likely already seen a variety of Tweets and hashtag about sugar daddy dating on Twitter, such as #sugardaddy, #fakesugardaddy, #sugardaddymeet, #seekingarrangement and so on. There are many accounts that claiming to be sugar daddies posting about the gifts they buy their sugar babies; they may post photos of cash in their hands, or photos of themselves buying expensive items online or in stores, and so on. Nearly every day on twitter, thousands of sugar daddies claim to give away large sums of cash to complete strangers. Are these accounts real? Let's take a closer look at what real Twitter sugar daddy looks like. 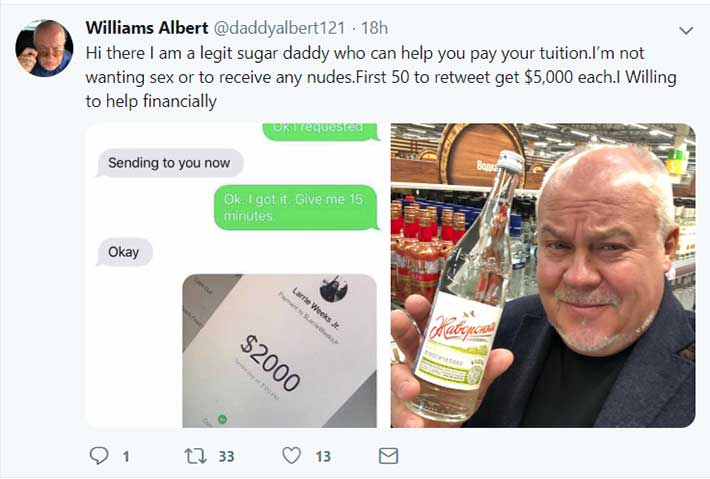 It is undeniable that a few sugar daddies prefer to post about looking for sugar babies on Twitter versus other social media platforms. And some of them like to ‘flaunt’ their relationship with their sugar baby on Twitter, which can include asking the sugar baby to post photos of themselves wearing gifts to their own twitter account. But like any online dating or social media, there is the potential for a Twitter sugar daddy to be a fraud.

Why Are There So Many Fake Sugar Daddies on Twitter?

There is no doubt that twitter is one of the greatest social media today, with a wide range of people, which has also become a gathering place for scammers. Twitter was flooded with young women and even college students looking for sugar daddies to spoil them with money and gifts for free. Setting up a twitter account is so easy that scammers can easily deceive people online at almost no cost. Some want to cheat your bank card or credit card information, and then your money; Some want to get your attention, get more followers, and then show you online ads to make money.

The most common scenario is when someone claims to pay you a lot of money, but only if you have to pay some kind of fee. They ask you to buy a gift card and send them the password so they can put more money on it. If you apply some common sense, at least you are clear that you intend to make money from your sugar daddies, so that they should give you money or a gift card code, not the other way around!

Those fake sugar daddies prefer to claim that they are not here for nude photos or sex when scamming and bragging about the stuff they’ve bought for their sugar babies. It is very easy for them to fake information, such as PayPal and other kinds of screenshots and then attempt to look real. Unfortunately, there are so many fake sugar daddies and even sugar momma accounts on social media like Twitter as well as Instagram and Facebook, and what they want is to profit from you. We do hope that more people could think twice before looking for their potential sugar daddy, don’t be fooled.

Now, you should have a general understanding of Twitter sugar daddy. Are you still planning to look for sugar daddies on Twitter? If so, you should read on to learn how to identify fake sugar daddies and how to avoid them. Personally, I think sugar daddy websites are better choices, good luck!